Born in 1810 in Dublin to an Irish mother and a Basque father (or more precisely a Souletin), Antoine d'Abbadie asserts himself as an ardent defender of his language and culture.

In 1836, together with Augustin Xaho, he published Grammar Studies on the Basque Language, before creating, a few years later, in Urrugne, the Basque festivals. His investment in the Basque people is such that, at his death, he was given the name "Euskaldunen Aïta". 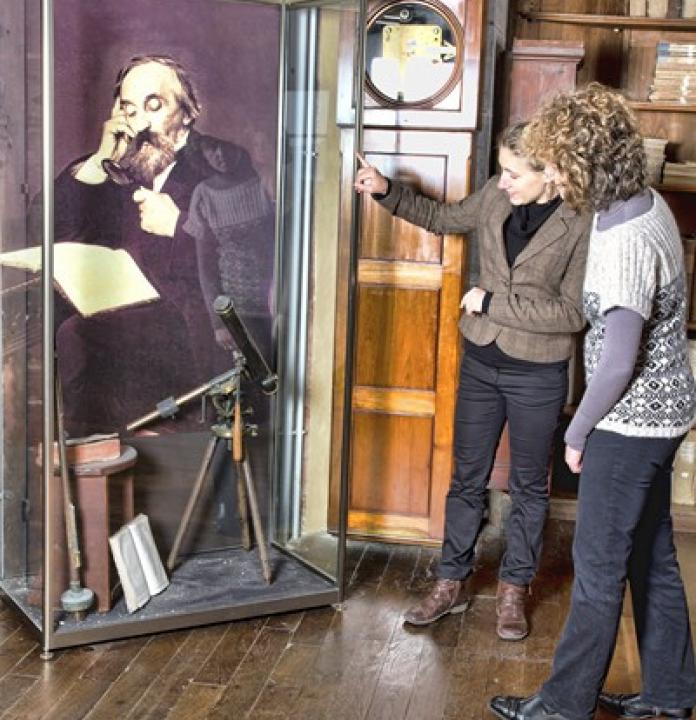 Scientist with a passion for travel

A great traveler, he made the first cartography of Ethiopia after a stay of eleven years in this country. Geodesian and astronomer, he was interested, for example, in the problems of vertical variation, micro-seismicity, sources of the Nile or celestial mapping.

Elected member of the Academy of Sciences in 1867, he was its president in 1892.

Its castle houses an astronomical observatory, which operated until 1979. On his death in 1897, Antoine d'Abbadie bequeathed his castle to the Academy of Sciences. She still owns it today. 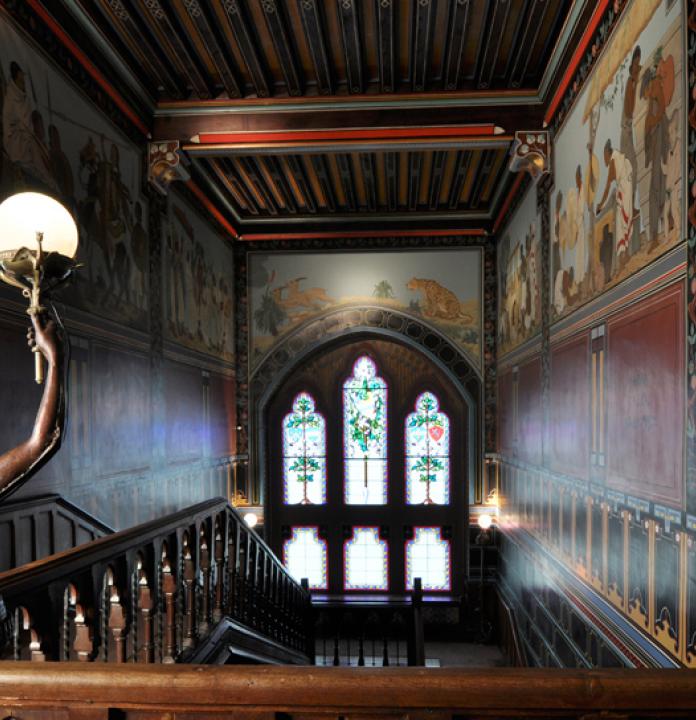 The main stairway is adorned with a highly coloured stain-glassed window, displaying the family coat of arms and the mottoes in the phylactery box borders: “To be rather than to pretend to be” and “My faith, my Rights”.

An unreal world of chimeric animals serves as supporters to the main stairway and marries admirably with the exotic decor of Ethiopian shields and animal horns.

It is located in the heart of the chateau. As a place to work and a place to reflect, the library symbolises Antoine d'Abbadie's encyclopaedic vision to life. The shelves run along side a gallery made of chestnut. Heavily bolted iron frames support the gallery in a design which fore shadows Art Nouveau work.

When Antoine d'Abbadie bequeathed his chateau to the Academie of Sciences in 1896, therewere more than 10000 volumes in the library, from which 960 books written in Basque and 234 ancient biblical or literary manuscripts written in Geez, the Ethiopian language used for liturgy. This collection has been transferred to the French National Library in Paris where they are considered as the most valuable ones. 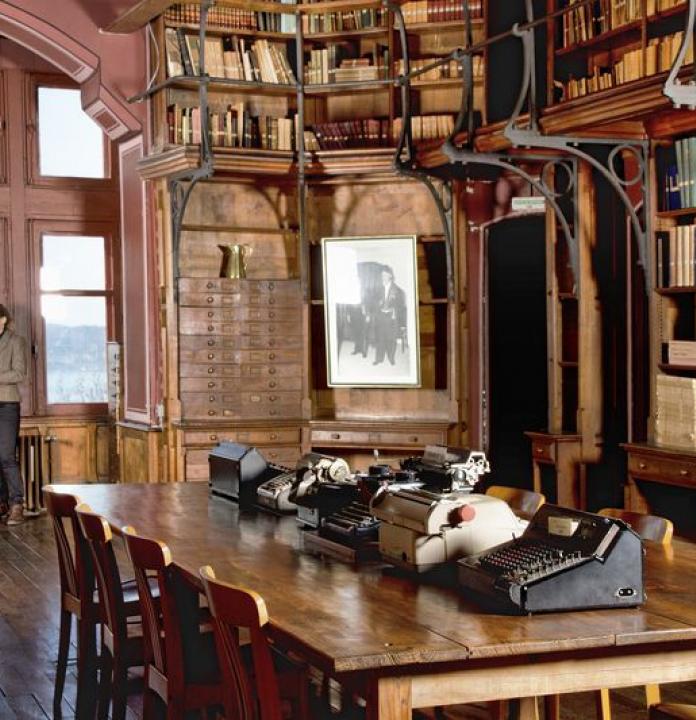 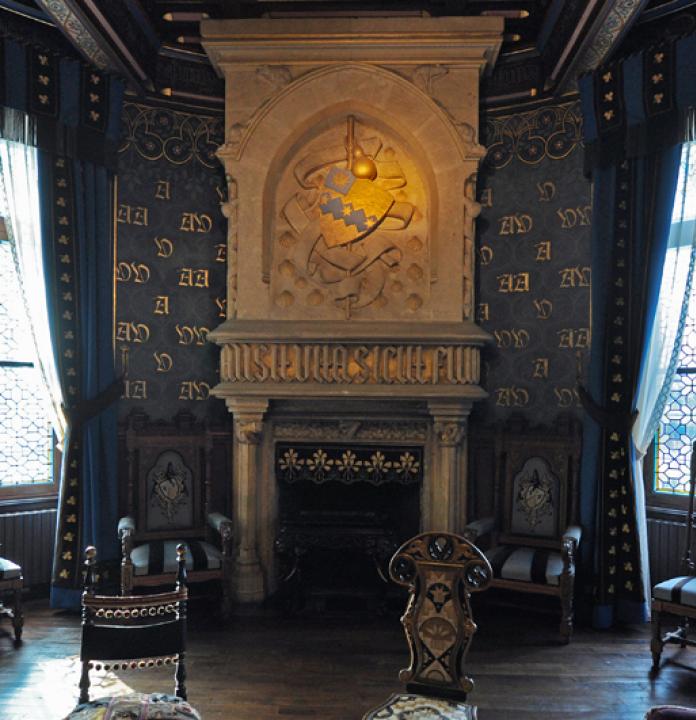 This large circular lounge is situated in the South tower. It is paneled to shoulder height, the walls above painted in blue and where we distinguish the gold monograms A(ntoine) and V(irginie) in gothic script.

The fireplace is the main element of the decor. From drawings by Edmond Duthoit, it is made of a regional stone (from Angouleme) and recalls some medieval house insides. On the centerpiece of the chimney can be seen Antoine d’Abbadie’s coat of arms with his personal motto “ To be rather than to pretend to be” boxed and emblazoned on a decor symbolizing the pilgrimage to Compostella. On the mantelpiece, a Latin quotation “Life is but smoke”.

The Guest of Honour's Bedroom

This bedroom was reserved for guests.

The four-posted bed also carries an inscription in Old French :"We wish you a gentle sleep, with golden dreams, to those whores the rein, a joyous awakening and a propitious morning".

The fire place is adorned with yellow and turquoise blue majolicatiles, on which you can read the Arabic proverb : " Never throw a stone into the well from which you drink". 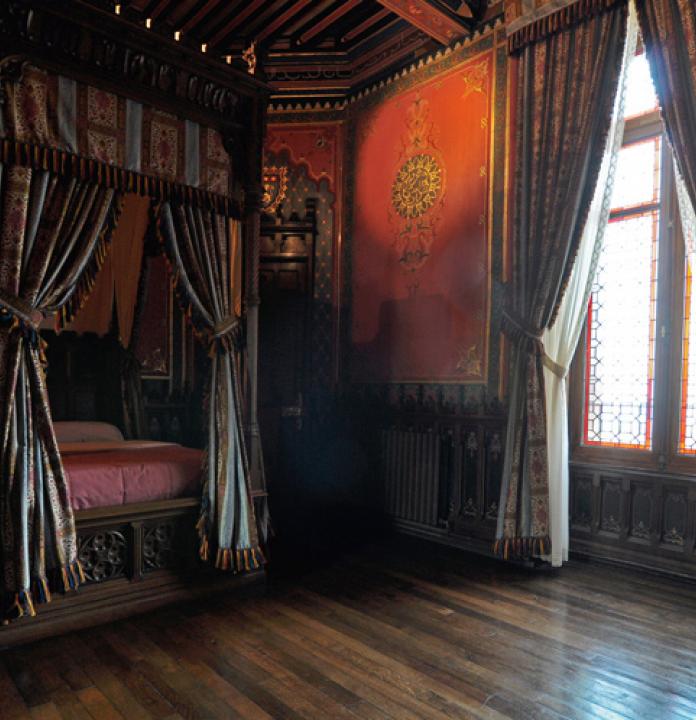 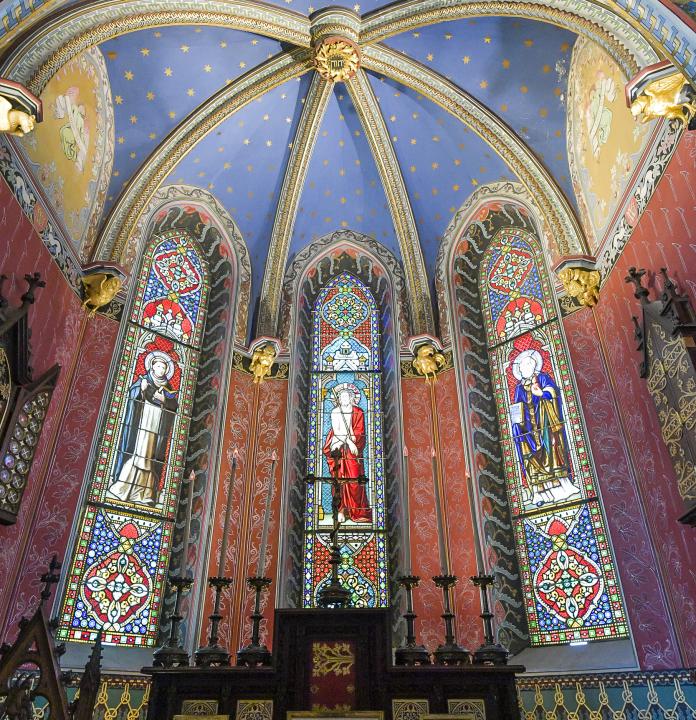 The decor bears the stamp of Duthoit and his strong liking for sicilian and oriental art. The nave of the chapel is rectangular of a size designed to accomodate all the local farmers of the surrounding estate, roofed by a magnificient paint edwood enceiling above carpentry arches. The walls of the nave are hung with red trompe l'oeil tapes tries where you can see the monogrammed S and A for Saint Anthony.

The choir, oriented to the East, bathes in a soft glowing light that filters through the three stain-glass windows : in the centre, "Christ suffering", on the left the Holy Fathers, Saint Thomas Aquin as and on the right, Saint Augustine. Antoine d'Abbadie and his wife rest in peace in a crypt lodged below the altar.

The outside walls of the castle are particularly decorated. There are many stone sculptures such as cats playing with mice, elephants, monkeys or snakes. Battlements, towers and keep make the building look like a medieval castle. The park is a dorned with palm trees and the landscape enjoys views on the ocean and on the mountains.

Abbadia will be revealed to you from the beginning to nowadays thanks to the outside scenography. Immerge yourself in the history of this multifaceted place : landscape garden, farming, science laboratory, golf course, even campsite. Elements of interpretation, archival photos and maps, time travel guaranteed. Abbadia will hold no secrets for you ! 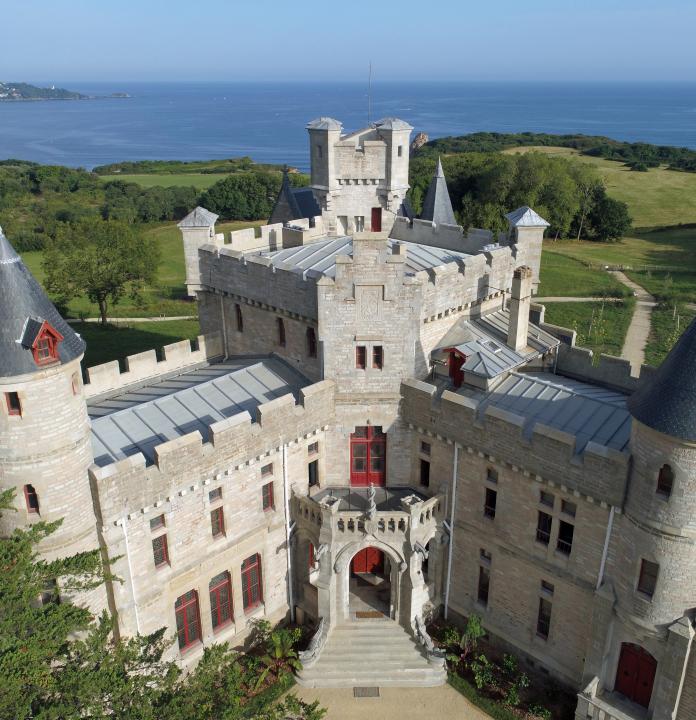